what is sea glass?

HAVE YOU EVER WONDERED WHERE IT COMES FROM?

In some parts of the world sea glass is well known, but surprisingly, there are still a lot of people out there who have never heard of it. I’ve had people ask me if it’s naturally occuring, or why they can’t find any near where they live. I hope to answer some of your questions in this blog post. 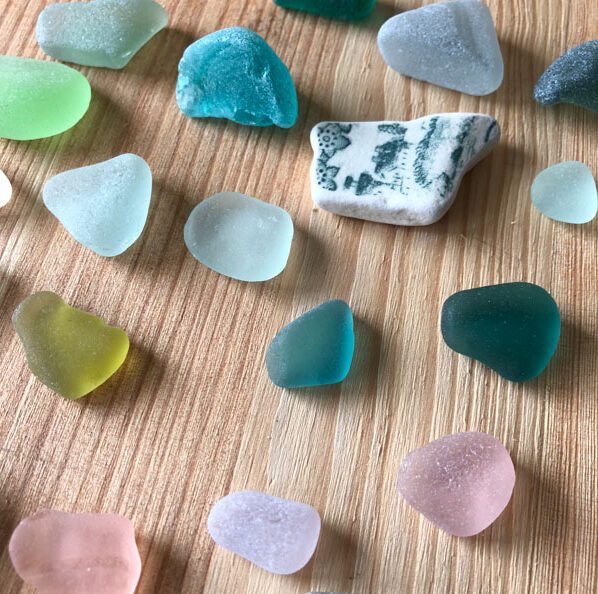 sea glass is not naturally occuring

Sea glass is glass that has been in the ocean for decades, at least. At some point someone threw it into the water, either on purpose or by accident. It has been tossed about in the sand and rocks, wearing down its hard, jagged edges. A combination of saltwater, sunlight and wave action create the softness and pitting that you see and sometimes even changing the color of the glass.

Many decades later, after nature has completed its art, the glass washes up on the beach, ready to be collected and admired. Beautifully, it is nature’s way of taking garbage, and making something we treasure, it is recycling at its finest!

Beach glass is not the same because it doesn’t come from the ocean. Beach glass is similar, but it is created on the shores of lakes and rivers.

can you make it?

No, you cannot. There are people who tumble glass shards in a rock tumbler in order to make an imitation version of it. This is viewed as a very dishonest practice and most collectors can easily spot the difference.

how did it up in the ocean?

Here in Portugal, where there is so much history from our waters, it is fun to imagine where the various pieces may have come from. Could it be a piece of an old olive oil jug a century old? Could it be from an 18th century bottle of port? Could it have come from a pirate ship? Or could it have been tossed overboard from a ship leaving for a great discovery? Glass has been in existence for thousands of years, so the possibilities are endless!

what is sea pottery?

Sea pottery is similar in that each piece is special and unique. Often you can make out patterns and can distinguish whether it was originally a tile or a piece of tableware, making it fun to imagine its previous life and history.

All sea glass and sea pottery I use in my jewelry and decor is genuine, handpicked by us from the beaches of Portugal, Spain and France. Make no mistake, there IS fake stuff out there!

why can’t I find sea glass?

If you’ve looked for sea glass, but haven’t had success, read my blog post about searching for it. In this post I give quite a few tips for finding it, the very steps I take to find it when I travel to a new location.

We use cookies on our website to give you the most relevant experience by remembering your preferences and repeat visits. By clicking “Accept”, you consent to the use of ALL the cookies.
Opt Out.
Cookie SettingsAccept
Manage consent

This website uses cookies to improve your experience while you navigate through the website. Out of these, the cookies that are categorized as necessary are stored on your browser as they are essential for the working of basic functionalities of the website. We also use third-party cookies that help us analyze and understand how you use this website. These cookies will be stored in your browser only with your consent. You also have the option to opt-out of these cookies. But opting out of some of these cookies may affect your browsing experience.
Necessary Always Enabled
Necessary cookies are absolutely essential for the website to function properly. These cookies ensure basic functionalities and security features of the website, anonymously.
Functional
Functional cookies help to perform certain functionalities like sharing the content of the website on social media platforms, collect feedbacks, and other third-party features.
Performance
Performance cookies are used to understand and analyze the key performance indexes of the website which helps in delivering a better user experience for the visitors.
Analytics
Analytical cookies are used to understand how visitors interact with the website. These cookies help provide information on metrics the number of visitors, bounce rate, traffic source, etc.
Advertisement
Advertisement cookies are used to provide visitors with relevant ads and marketing campaigns. These cookies track visitors across websites and collect information to provide customized ads.
Others
Other uncategorized cookies are those that are being analyzed and have not been classified into a category as yet.
SAVE & ACCEPT
Powered by